What a beautiful day in the snow! It is a treat to have lightly falling snow and no wind. Today the snow was not very deep. But it was very cold in the woods: 17 degrees. It was cloudy and snowing. You could see the sun a little while we were hiking. It was still and not windy.  Some of us were a little cold.

Amiah and Ella were our First Grader Leaders. Henry’s dad also came to the woods with us.

We had a wonderful time, and a fire, out in the woods!

Paisley’s plan was to gather sticks to make a fire. She labeled her drawing with the beginning sound for each word: “Sun,” “tree,” “fire,” and “sticks.” And she labeled herself with the snap word “me”!

Isla’s wanted to do a lot of things in the woods. She drew all the actions (and you can see the action marks) and labeled them: “Running,” “climbing,” and “jumping.” 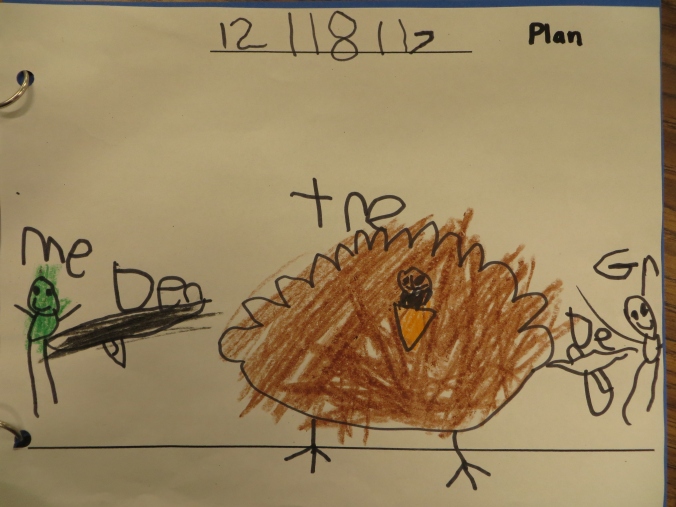 Henry’s plan was to pretend to go turkey hunting. Here he is with his gun. He labeled “turkey” and Gregory is on the other side with his gun.

We had a fire. Henry’s dad, Mr. Heal, made it for us. Henry and Gregory helped break up the sticks. They put them on a stump and then stepped on them so they would break. 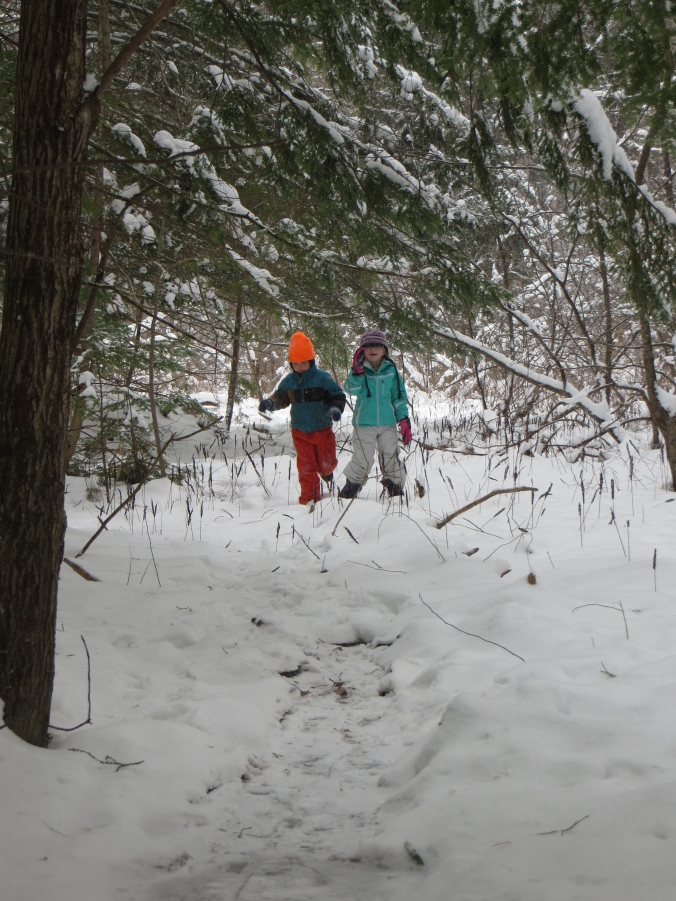 Paisley and Ian, down by the wetland.

Willow and Ian were hiking up the hill. They got really tired. It’s hard work to get up the hill!

One of our first grade Leaders was Amiah. She found a comfortable seat on a downed tree. 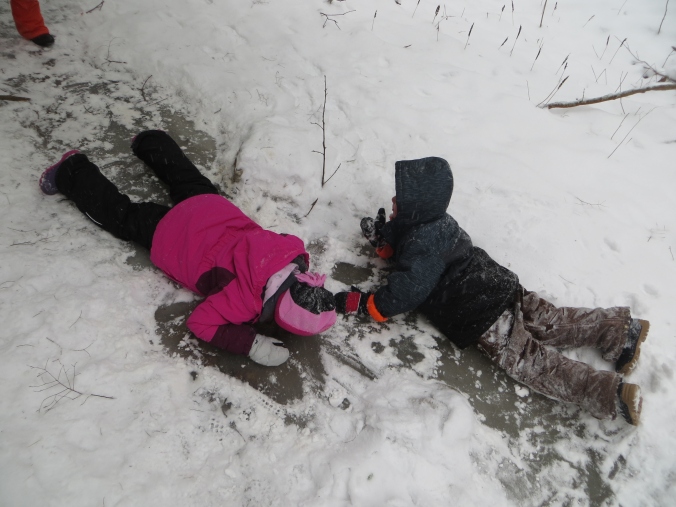 Ella and Dakota were sliding on their bellies on the ice. Dakota was also licking the ice. Ella said the ice was like a window and she could see pine needles underneath. 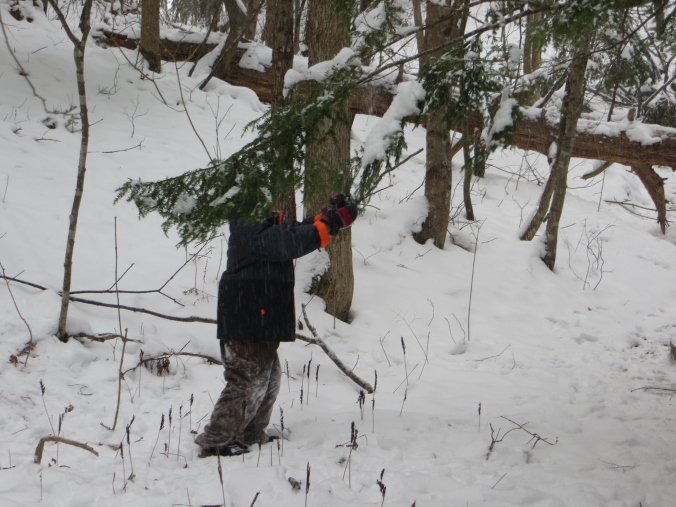 Dakota was shaking the tree branch to make it snow.

One of our first grade Leaders was Ella. She was playing Fox and Mice (or Rabbits) with some Kindergarteners. Ella was being the Fox and then Isla, Ian, and Isaiah were running away so they wouldn’t get tagged.

We were having cupcakes. We had them because it was Henry’s Birthday Circle. Everybody got their lips and faces different colors because of the frosting. 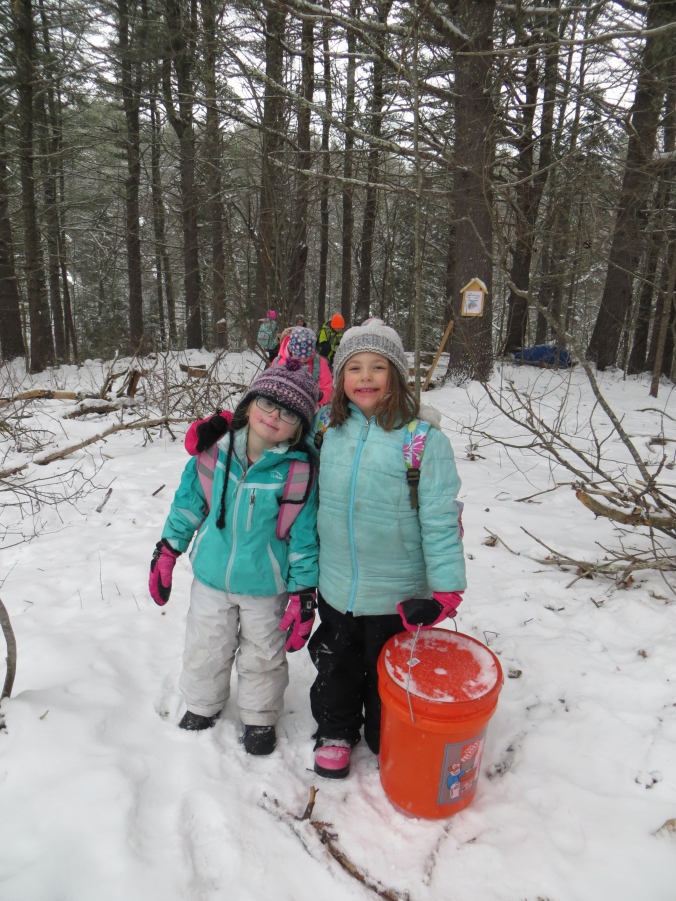 Paisley and Ainsley were walking together. Ainsley was trying to make Paisley feel better.

This was our first real snowy day in the woods! The second day with snow, as Dakota and Avery reminded us. The weather was cloudy at first, but then the sun came out. It was 34 degrees in the woods.

One of the most exciting things about today was the sheer number of tracks we found. Deer tracks were everywhere! We learned that they are shaped kind of like a heart and they have two toes.

Willow was playing spider and looking through a window.

Gregory was trying to shoot deer. 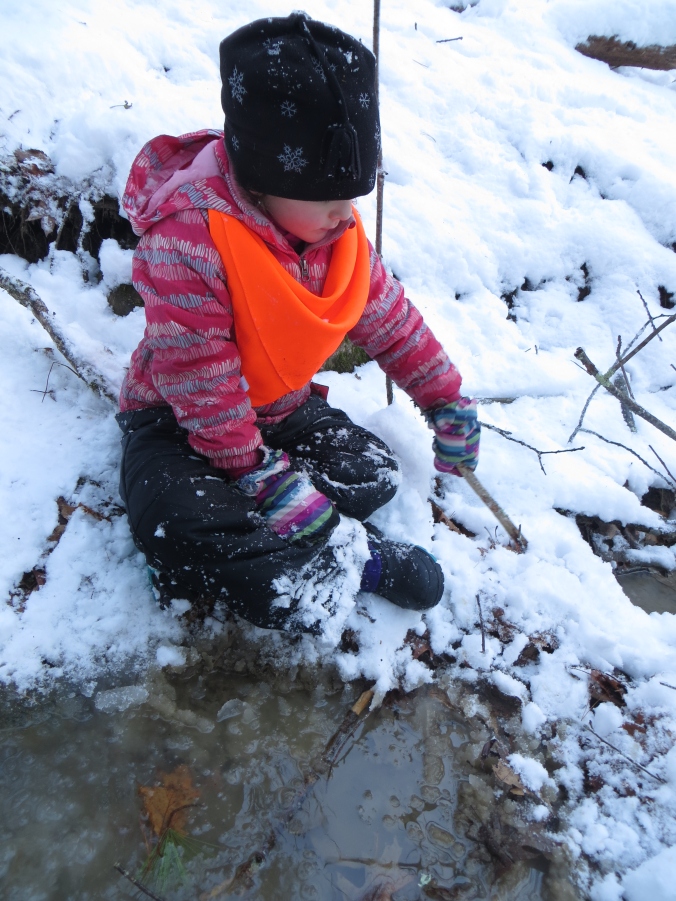 Avery was making ice water for Gregory and Henry to drink when they got back from hunting. They were going to watch a movie. 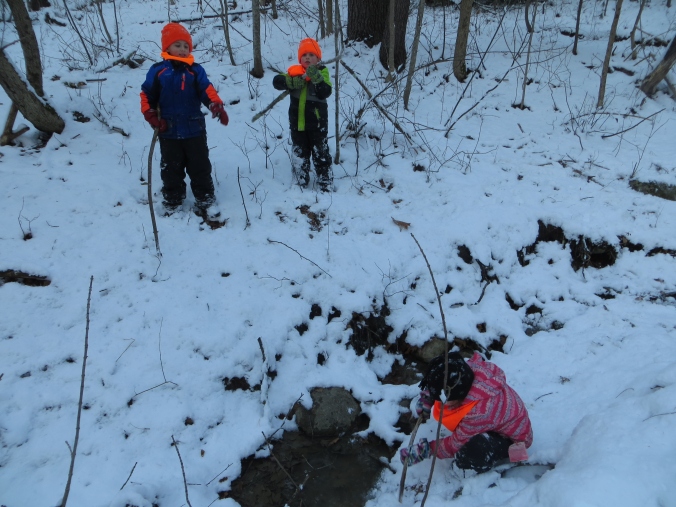 Avery is making the ice drink and Gregory and Henry are hunting. 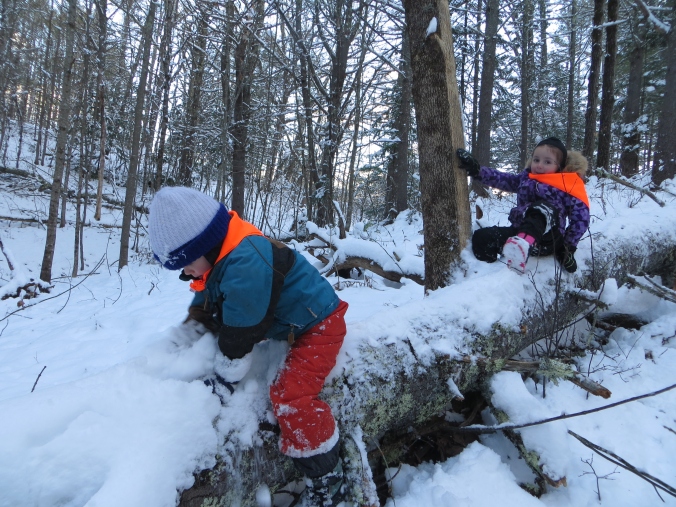 Willow and Ian were playing spiders. Willow was the mom and Ian was the baby.

Isla found a hole in the side of the stream and thought it was spiderwebs. On closer look it was ice crystals!

Isla was shaking a little tree to make it snow!

Willow and Ian found a place where a squirrel ate the seeds from a pine cone. There was also a hole where the squirrel might have gone in. 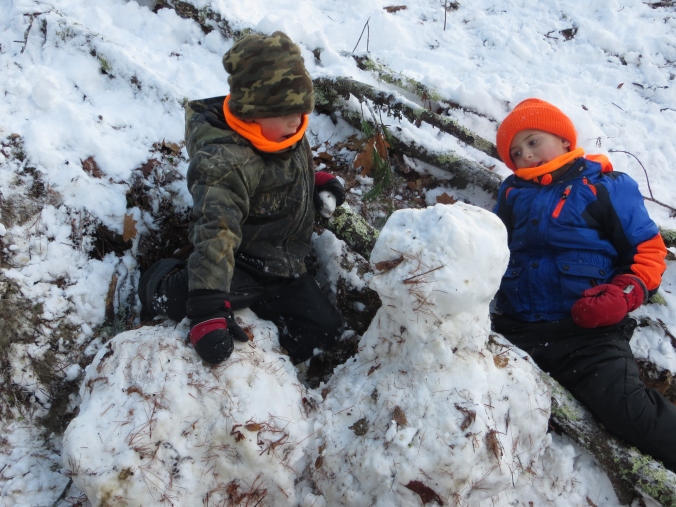 Dakota and Henry were making their snowman. 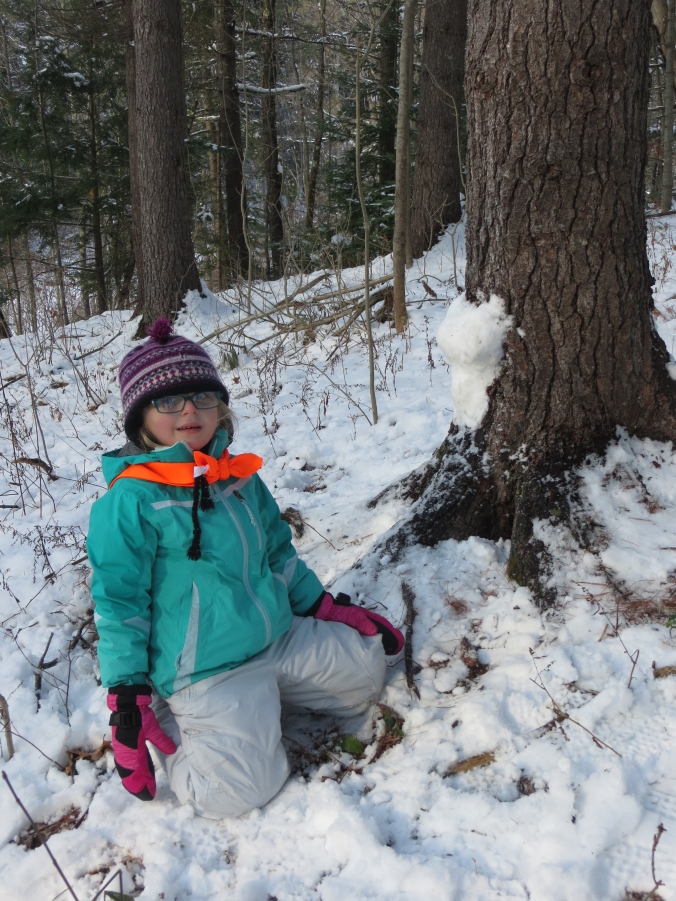 Paisley was trying to make a pillow on the tree so she could lay down in her Sit Spot.

This is Calliope and Beatrice. They were our first grade forest leaders. They were in their Sit Spots. 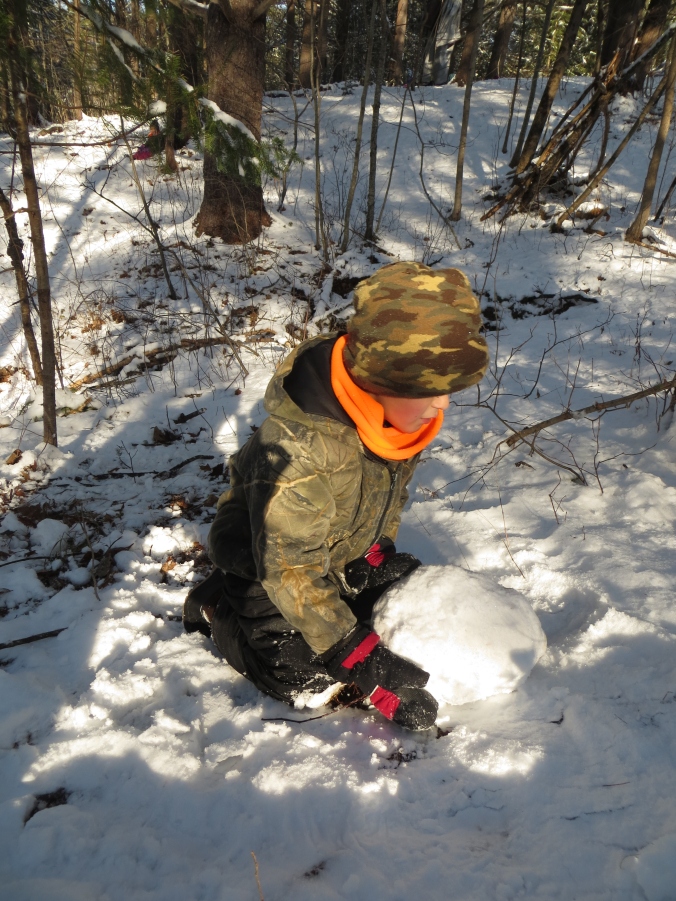 Dakota was making a ball for a snowman. It was huge when Gregory, Avery, and Henry helped to roll it up the hill.

Willow the hat she’d lost last week. It was frozen like a popsicle!

Ainsley was trying to pull up sticks in her Sit Spot. She learned about how you can tell dead branches from live ones. Live ones are hard to break and they have a little bit of green inside!

Ian jumping across the ravine at his Sit Spot. 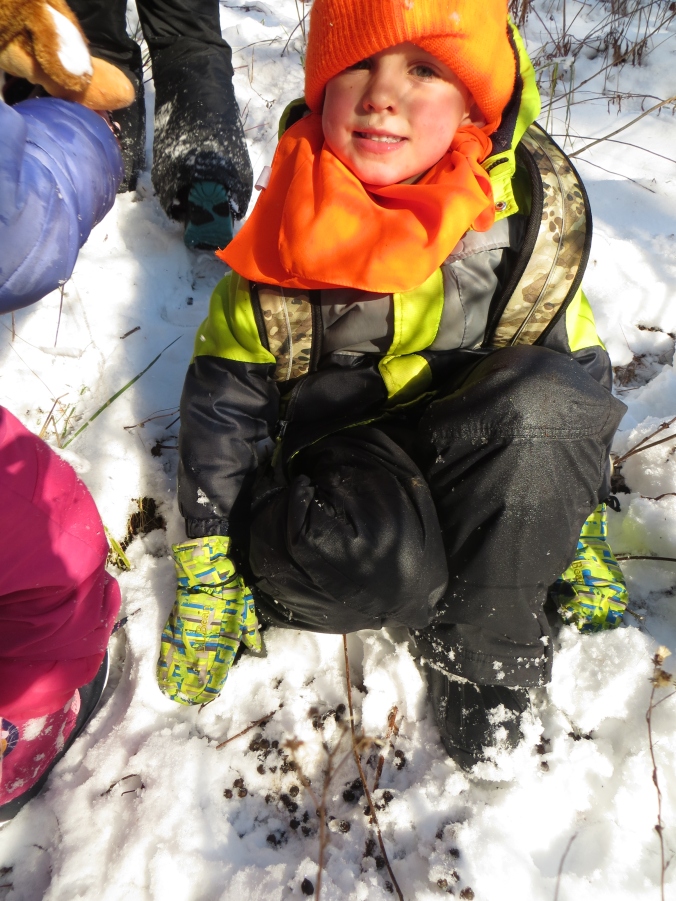 Gregory found deer scat on the trail of deer tracks we found!

We had a great day in the woods today. The weather was sunny and chilly. It was 34 degrees. It was not that windy, so we could have a fire. We had a lot of guests in the woods. We are starting to have First Grade Forest Leaders from Mrs. Dwyer’s and Mrs. Mackenzie’s classes. Mr. Frank was our fire tender. And Ian’s parents and his baby brother Rowan came for his birthday circle. 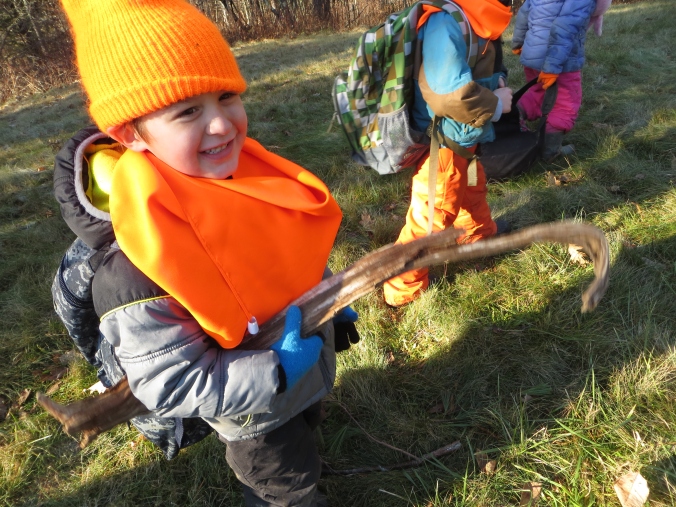 Isaiah had a hook stick.

On our hike, Isaiah took a shortcut through a lot of brush.

During Sit Spots, Dakota was cutting the skin of his tree and found sap. We all tried poking the little bubbles to get sap out. We smelled it and Ms. Atkins said it was a balsam fir and it smelled like Christmas. Some of us even tasted it! It was bitter and strong.

Avery was poking the tree to get the sap out for the fire.

Isla was trying to climb to the top. Henry was yelling to his pretend squirrel pets, “Open up the door!” They were under the roots. They weren’t listening.

Sometimes you just gotta lie down in the woods and kick a bouncy tree.

Isla in the woods!

Avery, Henry, and Gregory discovered that you can climb to the top of the roots on the downed tree. They climbed up really high. Then other kids joined them. They were trying to cut the roots off.

Ian was being a tarantula that had poison (even though real tarantulas don’t!). Avery was the zookeeper. She was pretending the ferns were flies to feed to him.

Dakota was playing on the big log and breaking off a stick with one hand.

Paisley was sitting with Mr. Frank and eating her lunch.